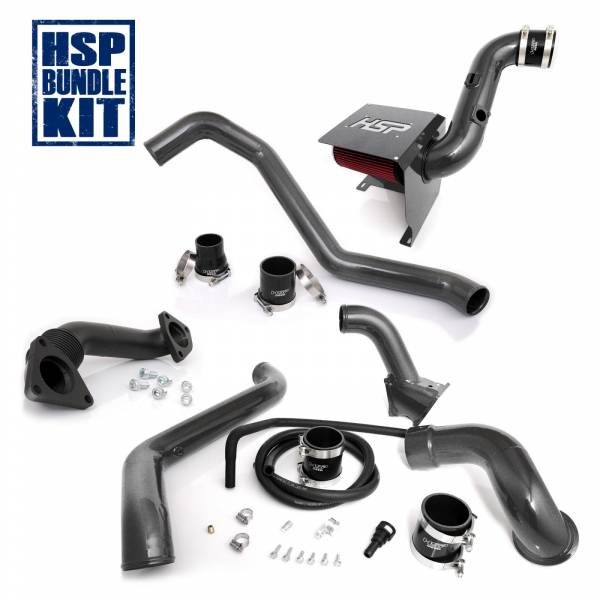 This kit will allow you and your engine to breathe easy. Featuring a mandrel bent 4 1/2 Inch inch intake tube for massive airflow gains, with HSP's signature heat shield Box eliminating unwanted hot air entering the cold air intake. For every 1-degree increase in intake air temperature will result in a 3hp loss.
This kit also features HSP's high flow turbo mouthpiece. This turbo mouthpiece will give you the ability to reroute your factory PCV system and remove the factory resonator Box, eliminating unwanted engine oil gumming up the turbo and intake system. Featuring 3-inch mandrel bent hot side and cold side tubes with our max flow Y-bridge and turbo mouthpiece.
The factory hot side intercooler tube on your 2011-2016 Duramax is notorious for failure. The two-piece design from the factory has crimped on boots that have a tendency to fail under heat and pressure, it's only a matter of time before it leaves you on the side of the road. The factory cold side also has its limitations and is made of plastic with an unreliable clamping system.
This kit replaces all the failure-prone piping and will come with our race-proven 5 layer silicone boots to give you years of worry-free driving. Companied with our Max flow Y-bridge and turbo mouthpiece you can expect to see gains in performance while keeping engine temps down. We have also included one of our 2-inch passenger sides up pipes featuring .120 inch tubing and the best bellow on the market.
The factory up-pipe is prone to failure at the riser caused by excessive heat and pressure.

LML: 11+ VIN Code 8
How Do People Know Vin Code? Engine code is dictated by the 8th character of the VIN number. The 10th character is the year of the truck.